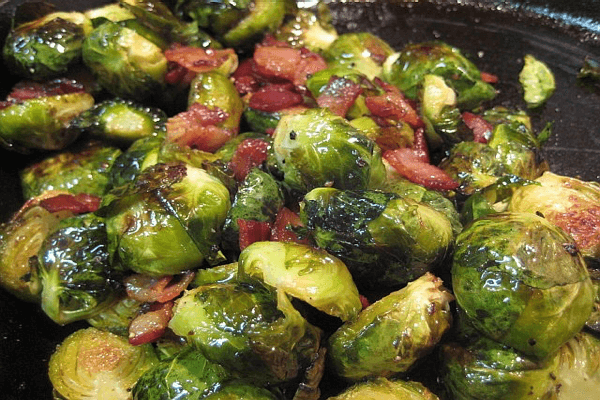 Brussels sprouts are at the top of my list as far as vegetables go they’re healthy. Healthy, and even better with bacon. If it’s the bitterness of sprouts that turns you off, this recipe would be a welcome change. Roasting the sprouts and coating them in an apple cider vinaigrette tames any bitterness.

Preheat the oven to 400 degrees. Cook the bacon in a skillet over high heat until crispy, about eight minutes. Transfer the cooked bacon strips to a plate lined with towels to drain, then finely chop the bacon into bite-size pieces. Transfer the residue bacon fat into a bowl and set aside.
Spread the halved Brussel Sprouts in a single layer on a baking sheet. Drizzle with olive oil and sprinkle with salt before tossing to coat evenly. Roast the Brussel Sprouts in the oven for about 20 minutes, until brown and crispy.
While the Brussel Sprouts are in the oven, make the vinaigrette. In a medium bowl combine the shallots, 1/2 cup of the reserve bacon fat and apple cider vinegar. Whisk to combine.
Remove the Brussels Sprouts from oven and toss with the dressing. Serve hot.